David Perkins for “In Hereford, Hollywood and Hawaii, The Huawei is seldom the Highway”

I’d like to thank all those who believe themselves to be in requirement of an appreciative thank you from me,  and a special thanks goes to the creators of ancient film musical “My Fair Lady” where I first perhaps heard of language coaching.  I’d also like to thank Chinese Company Huawei for being relevant news during this period in our history and to the American President for making them relevant and I’d like to thank Quintin Tarantino for his Once Upon A Time In Hollywood, that I was unaware of when coining this phrase – though having seen that movie, those of us who enjoyed it should perhaps campaign for the Once Upon A Time In Trilogy to be made, I am sure many exciting adventure stories can be found in Hereford and Hawaii and I look forward to seeing them on the big screen.

So I loved watching Film TV and Music award shows when young, and indeed have quite enjoyed once again indulging that enjoyment in recent years, although with the advent of the internet enabling us to see just how big the award circuit is, one can well imagine that it must become quite tiresome for those having to go through the rituals and glad handing and so on, hence perhaps beyond those regarded as must attend Headliners, one can actually see patterns forming whereby an informal taking it in turns approach appears to be the order of the day for some of those attendee’s & business insiders, that is unless of course a particular movie has been chosen or nominated and supported by an Industry budget that requires some level of quid pro quo for the next project.

This year seems to have once again staked a claim to controversy, though I do know from my own research that both Bafta and The American Academy despite headline condemnation, have made various changes at lower levels and grass roots to boost talent within there spheres of industry, so representation does exist within the business (as us fans of many big blockbusters often see anyway) though it does also often appear that the age old quote that “There is no such thing as bad publicity” often works in creating debate, where really people might perhaps think on the issue of “is this behaviour, activity, achieving any given objective, what are the underlying motivations etc?

I have perhaps always considered myself to have more of an American Dream than that British dream that Theresa May wanted everyone to take up a year or two ago, and that perhaps was brought about through my own childhood in seeing and being able to identify that BAFTA was something of a closed shop to people from council estates and working or underclass backgrounds within the United Kingdom.  whilst I did well at primary school level in the acting stakes of school plays, by the time of secondary school education the wealthier Middle Class children were always given the plush roles surrounding stage productions etc. no matter how many lesser background school peers put themselves forward.  There is also the debate over what Cinema is for of course, many at BAFTA seemingly love the Hard Brutal Ken Loach school of showing life on the estates for no non well to do within society, where I and I am sure many others go to Cinema for ESCAPISM from reminders of our day to day realities and so on.  I think there is of course merit to both approaches though, it does seem that those with the more escapist dreams and so on are more shut out of the industry, than those that love the status quo of hard life on the streets and costume dramas.

Anyway having said all that I was really pleased with multiple awards at the BAFTA’s – I was pleased for Kathleen Kennedy – becoming a fellow of the academy – she has worked with some greats as a producer of course, and I think her CV demonstrates more of the fantasist escapism that I and many others prefer than what is supposedly what the British Academy is all about.

I was also really pleased for Andy Serkis – another talented actor who despite video’s demonstrating his actual acting the CGI roles and characters he plays, has always somehow lost out through the greater dictum that his roles are CGI, equivalent perhaps to those that perform Voice Over work within radio and cartoons etc.  I genuinely think that given the now established history of performance for CGI characters (at least from some actors) that a category reflecting those performances could be created, if they are not allowed within the already burgeoning list of awards.

This weeks books purchased by me, are all potentially movie related and I have so many now across so many areas of live that I can well imagine folks wondering if I have any real highlights or favourites that I would recommend again and again and again, and in truth I do, those that I return to again and again, so I may well in the coming days craft a list together as a kind of highlight of my favourites within each category.  I know some might surprise more than others, because whatever my own bias is, I think I can demonstrate that expensive does not always equate to liked or loved etc.

These recent purchases are unlikely to make my favourites lists though you never know, and if you are thinking I am missing books on this Award category or that award category – there is high likelihood that I already have multiple books on a given topic and subject – I can say that is true for ACTING, DIRECTING, LIGHTING, WRITING, PROPS, CGI FX and many other technical aspects of the creative processes, that often receive less attention than the favoured headline awards. 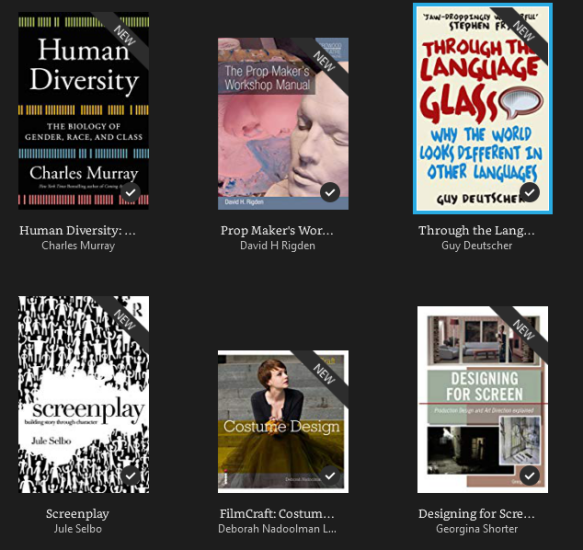 So what lead to these selections, well I decided to run with the FILM theme and I already have many related books, where I lack is probably in the CRAFTS such as Prop Making and Costume Design, so I decided to add to those areas, although of course when you think on it, and go through the pain of your mental compartmentalisations, you come to realise that they are not all that differing from buying books on a now standardised industry, (although like the London Premium – Film & TV and Theatre perhaps have there own version of the industry Up mark in costs), I have several Stage & Set Production Design books though often enjoy adding to them.  The “other language” issue is not something that bothers me, always having enjoyed many a subtitled movie over the years, and indeed having worked with groups of foreign nationals for a number of years.

The Human Diversity book will be interesting, although I wonder as to whether I will find myself in agreement or disagreement with what is written within that book, my own view since taking up the Technological Meditation a few years ago, is that pretty much everything is a Nurture versus Nurture debate, although you cannot argue these points easily with other people, because I was no different in believing what I believed kind of intransigently “no matter what” until the Brain Stimulus Technology worked its magic in giving me a whole new level of awareness and enlightenment that I might have read about a hundred times from various sources without ever having experienced such things within my own life and experience.