Just as in my last post I said writing has many books, so too does the realm of drawing.  Although given what I said with regard to interpretation and meaning, I also ventured into some of the now scientific related realm of drawing within my research.

I like many of these books simply because like many people I grew up with Marvel and DC or Beano and Dandy comics or Disney’s Studio Productions movies, and if I could just afford the price etc.  Now of course Realms such-as Amazon make you aware of just how many books and experts exist that you have never heard of.  I should state that most of these images are from my Kindle Library and many Best Books within these realms are not available on Kindle (sob), though I do have some of them.  Frank Thomas “The Illusion of Life” or Richard Williams The Animators Survival Kit and even Betty Edwards Drawing on the right side of the brain.

So some favourites on my kindle 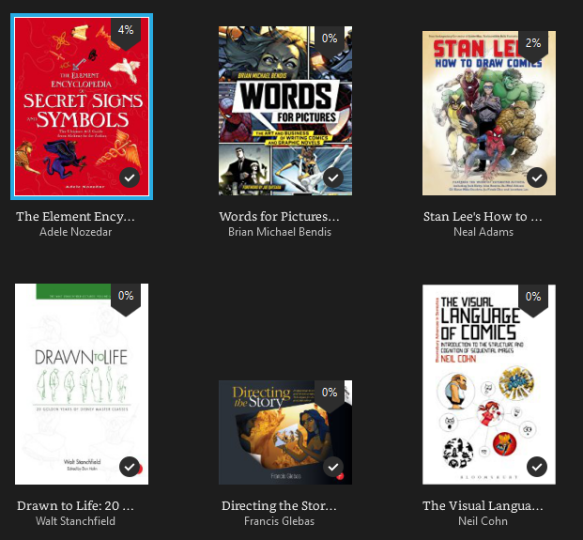 Hope that is not too many, though in multiple instances you do find yourself with more than one book from a given book writer, Drawn to Life is a Disney related book and I also have the 9 old men.  Stan Lee of course famed for Marvel characters, though his drawing characters, comics, and writing comics is a trilogy effort.  Comics are natural Storyboards (IMHO) so that is a simple cross realm intelligence.

For Science Neil Cohn has perhaps excelled in at least a couple of books in giving a certain level of Scientific Theory of understanding on these things. I also have doodling styled books and books that claim to cover comics, film, cartoon, animation, video games so you can see that drawing whether as beautifully crafted as Disney or simply stick outlines from this particular Dave, can be simply a matter of skill and practice or indeed finding folks who can.

The Book Directing The Story is interesting in that it is officially listed as a Storyboarding book and whilst a nice book to own, I think many other drawing skill books related to multiple non film realms have better all round content guidance.

Words for Pictures, much like another book I have, Drawing Words & Writing Pictures, makes a point on this issue of translation that it can always be worth returning to.

Why Secret Signs and Symbols?  Well you do find again and again that you want to be able to take inspiration from anywhere, and many basic drawing books focus on character or comic strip or doodles, and whilst environmental features and props exist within cartoons and indeed storyboards as anywhere else, you do not necessarily, unless you go to specific kinds of sub category books find much inspiration within many leading recommended books.  The secret Signs and symbols perhaps an example of me going to a subcategory, just as you might buy a book on specifically drawing buildings or vehicles.

I know from my time at University that much of what we did within Computer Styled Environments was a whole encompassing of Environment or even some of what is known as Rotascoping and other efforts at replicating real world detail and physics (think Pixar type films, or CGI character films, people in suits with ping pong balls attached). In many instances of rendering images you might select a start and end position, and a computer would render the between’s, just as many artists used to hand draw between’s at Disney (prior to Uni I actually had software on my home computer that could render such images way back in the 1990’s), although what Pixar perhaps got correct was that if you read some of the ancient Disney style books, many human characteristics are EXAGERATED for effect stretch, squeeze and so on (a minor disregard for real physics) where Live action films of recent years I think have often gone for boring total physics and thereby lose one of the secret key ingredients to the ancient magic of Disney. It is always a tough effort to gauge these things, and I know I can discuss old films and new films with older and younger generations and we all seem to have differing attuning to what was our generation of these crafts and how they affect our thoughts, feelings and behaviours or opinions on the movies, although it can be noted that even many modern cartoons at least still go with all those ancient techniques of incorrect Physics.

Yes so I studied Computer Science and Artificial Intelligence at Uni and of course these are modular courses, so you have modules on very many related topics and subjects, even if it is not where you want to specialise, you might cover the basics on a course such-as 3D graphics.  computer Science more than many other areas of Study is actually more of a unifying realm in being utilised across most sciences and beyond! My books from that period of my life are of course actual physical books of that era (circa 2000) although in knowledge terms they are as relevant to day as Stan Lee’s Marvel related drawing books, or Frank Thomas “Illusion of Life” Once you have a knowledge of basic underlying principles & theory the Advancements are often technically more difficult to get to.  Much like stepping stones to the Horizon taken in small steps, many computer related realms have advanced to such a pace that the energy that got you to 50% of a particular processing capability when doubled only get you a smaller percentage such-as an extra 10 percent advancement and then the energy that got you 60% is used again to get to 65% and so on much like assorted edge of the black hole theories & Mathematics.  All this is digression, though I just wanted to point out people often within many life realms have unrealistic expectations of what can actually occur within a short, medium or long term plan etc.

People who learn these basic art skills at whatever level or need requirement, can actually feel better pleased at there skill development than many of us who have in various shape and form sort to cut the human element out of the process through using computers, yes differing skill sets, though I often think many a geek could benefit from returning to some creativity and understanding of what they are seeking to replicate or replace, in order to understand the finer points of a skill set that is not always a simple matter of programming.

So you have storyboarded your book adaptation, what might you want to do next?

There are of course a multitude of possibilities get finance, get a studio, get actors, find a director, producer , schedule a work flow, timetables? book a sound stage or access to appropriate facilities? do I need set designers and props and costumes?

because I am a one man band who has studied many books, it often seems somewhat of a merry go round, where nothing ever happens unless you take action for yourself.  So if I was a small time independent (many books on independent film making exists) I might say to hell with the demand for script refinement and better cast and funding and so on. Though you do typically still require a team even if you are merely filming on your mobile smartphone.

So next up, how might you translate your storyboard to Visual storytelling?