So for those who do not actually know me,  all that well, beyond perhaps occasional viewings on this blog, I have been a little pre-occupied off late with Funeral Arrangements for my recently deceased father. So as a somewhat disruptive break from the regular routine, the images that appear first will be a little differing than normal.  Whilst most arrangements and dissemination of Funeral information can be done as a collective thing, one of the more personal details (for me) was what to wear.

Do I go with what is being recommended by experts everywhere throughout these times of global crisis? A Hazmat?

or  do I actually go with what is usually considered more appropriate for such functions.

That is of course, the Black Suit and Tie seen here in my own private dress rehearsal. 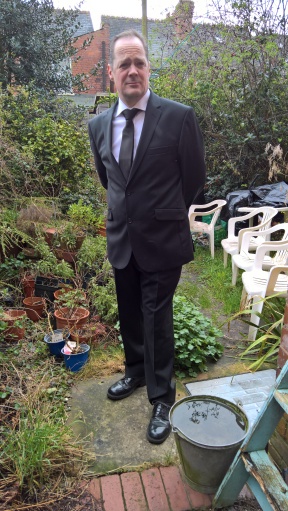 The closest I am likely to come to Living the James Bond Dream of International Espionage Agent – although a change of Tie or Shirt, enables a suit of classic appearance to be appropriate for more than one occasion in which I may be called upon to wear such attire. As a fan of many a Detective & Espionage fiction it is surprising how many a Drama utilises Funeral’s as a sort of Hub or link to revealing very many plot points and relational ins & outs. Everyone of course typically having there own perspective or point of view on a given character.

For me in thinking on the issue & topic of death, I found myself not only thinking about what might be said about my Father in terms of anecdotes from throughout his life, though also longstanding themes, and indeed what may or may not have contributed to an earlier than expected demise, in terms of behavioural changes and so on, that have been witnessed not only by me, though other family members in recent years, in multiple examples seemingly brought about through his usage of Social Media. Yes life is a journey and everyone changes throughout their life, though one does fear that the widescale exploitation of Social Media, and the obsessive demand to connect & debate & become involved in Community and so on, has taken very many people down paths that from a more Health & Wellbeing consciousness perspective do not necessarily have any given individuals own best self interest at Heart.

Anyway I usually publish an image of books that I have been purchasing and can now continue in that fashion. There are several images below, so plenty of choice and options, should we any of us find ourselves, with more time on our hands than we know what to do with.

So what is special about these books?

Well I have of course been regularly meditating for several years, and indeed studying a wide variety of Eastern Philosophy meets Western Philosophy styled subjects and topics, and recent events had me of course thinking on the course of my own life.  Rhythms Of The Brain, seems to sit nicely in those areas I call cross-realm-intelligence, whereby too seemingly disparate subject matter such-as what is known about brain, mind and body through Western Science, actually contributes toward a greater understanding of why seemingly ancient long lived Eastern guru practises such-as Meditation work.

The other two books were very much related to my long time interest in Computer Science & Artificial Intelligence, something I studied at University, and then events within the course of my own life seemingly took me in a totally differing direction. I love to maintain my interest in those areas, and I selected a couple of books that act as a refresher of what I already studied, and indeed a guide to any potential advancements I may have not been aware of. There is often a long lead time between Theory within research and development Labs and University’s, and widescale dissemination and take up amongst Societies, and indeed the next generation of Technologies.

These selection of books was perhaps me wanting to make up for not having published in recent times.  I have stated a belief that all are actors and actresses, and that the speed of life from a young age, tends to shape our inner and outer Worlds, without us necessarily going into the actual thinking processes behind these things.  The Ellipsis Manual is probably a thinking about it conspiracy theorists delight, though for me and my usage, I was simply impressed by the contents list.  I have read much about body language interpretation over the years, and do not know what to expect from this book beyond knowing that I have often disagreed with many an expert on the matter.  Yes we all often know what we regard as good body language etc.  Though often many of us are potentially less than optimum examples of these things, through our own life experience and acquired trauma etc.  The next book Dreamscapes of Modernity seems to also fit in with this idea of cross-realm-intelligence or interpretation, in the sense that it appears to be a fairly newly developed idea about progress within the World, and how these things affect so-called Social Sciences.  Signals and Boundaries, once again takes us into the World of Cross-Realm-Intelligence in that much like the Computer Science book above Probabilistic Graphic Models, the underlying theory or framework or scaffold can be and has been utilised across very many Science and Day to Day Life Realms, though again many people take the systems and end user content knowledge for granted, when in fact a knowledge of the foundational building block can be far more rewarding, for those that invest a little time and effort in the study of such things (irrespective of educational level and belief and so on).

And There is More

Yes, in having done various Learning Strategy styled courses, I noted that various books and bibliographies were often being referenced, and I of course like to check out such materials for myself, Although sometimes have to rely on getting a non digital version or paper as it was known back in the day.  The Holographic Universe and The User Illusion are both books that once again combine what is known about Present Science Theories (at the times they were written), and in typical fashion also act as a kind of reinforcement for some more esoteric traditions & beliefs, where an overlap seemingly exists.  The 3rd book here is from X Prize Foundation creator Peter Diamandis and Steven Kotler, and I like the inspirational aspect to Progress that The X Prize Foundation brings to the table, and Steven Kotler has multiple works within his portfolio that are of typical interest to Tech-heads and Sci-Fi Fans.

As someone who enjoys the idea of NOW, as more of a concurrent and present reality within his life, than something he simply used to read about from experts, one does hope that at whatever age, and developmental growth level  anyone reading this is, that they can take time to step back from all the overbearing and overwhelming daily news cycles and conspiracy theories, and maybe reorganise and reprioritize how you think, how you feel and how you act, in accordance with what you know now, and beware the merchants of crisis.

PS. The Title on this occasion was due to a seemingly malfunctioning Laptop or Internet Connection, whereby I was seemingly unable to publish all that was to be included within this article. I shall take that as a spiritual hint (it’s a Sign) and see what it does allow me to publish.  Hmmmn.