Strange though true – it is easy to imagine myself on ancient quiz “Call My Bluff” being asked to describe what the Corona Virus is – my answer would of course be the following truth – The Corona Virus is the word of mouth virus that afflicted young children in 1970’s  Hereford, England, United Kingdom whereby upon hearing that they could get money for returning the glass Corona Pop Bottles to the local shops they typically immediately rushed into action seeking those dastardly pop bottles anywhere and everywhere.

Strange though true – somewhere around 26th March 2020 (dependent upon Global Timezone) ,  I participated in a telephone call in with those Holosync Coaching experts who in these times of the Corona Virus have been having some extra online coaching & discussion sessions, I can be heard somewhere around the 1 hour and 25 minutes mark.

Somewhere during that call I confusingly spoke on the issue of Corona Virus as something of “A Matter of Life and Death” – to cut a long story short, the United States President used that very same phrase a few days later. Holosync is of course excellent at bringing you to states of awareness and giving you ah-ha’s and noting synchronicity and so on.  Unsure why I utilised that phrase off the top of my head during the call in – though I can say the primary source for me was a favourite ancient film starring David Niven as Squadron Leader David Carter in the film of that name – called “Stairway To Heaven” for its American Release.  For me when I first started Holosync somewhere around 2010 and contributed to the discussion on Bill Harris Centerpointe Blog at that time – it very much felt like you were the small insect being discussed & judged by all these incredible super powered Holosync Users. Whilst I am probably not the first or the last to have gone through such a range of emotions, thoughts, feelings and behaviours, it does seemingly become something on an ongoing theme in your life, irrespective of how your own personal development has progressed in the intervening years.

So we in the United Kingdom have either continued in our key worker roles, or indeed participated in staying at home and playing the game of Simon says… get their Manufactured Consent.

Simon says risk your life and gain herd immunity – hmmmn that did not last very long did it, – whether it is fear of missing out or otherwise is an interesting debate to be had.

Simon says wash your hands – I’ve always washed my hands regularly anyway and it has long been a part of my daily routine whether in work or social arena’s.

Simon says light a candle in the window – I lit one on the doorstep, as the window would have seen the net curtains go up in flames.

What else, well I signed up to Disney Plus and am pleased so far with what I have seen from the new streaming service, yes I know great discussion and debate can be had on the benefits or otherwise, and comparison with other outlets though horses for courses and all that.

I have also continued in my book buying ways though am unsure as to the meaning one might give to such things. 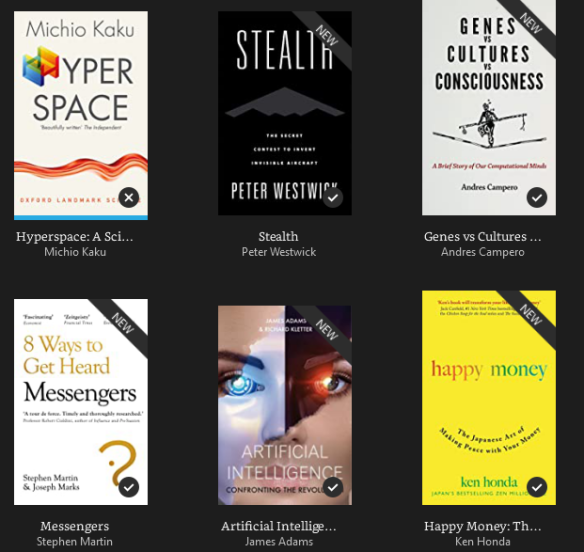 Happy Money – a book seen within an email from Learning Strategies that I thought – oh I wonder how that might benefit me.

Genes Vs Culture Vs Consciousness – kindle unlimited – another freebie.

Stealth – this book was on my wish list for a while, another strange anecdote is that a book I purchased last September “Steven Spielberg : Style By Stealth” for £7.99 is now retailing for £50.99 (at least on my Amazon search) hyperinflation?  (Apologies to anyone who saw me highlight the book and thought I paid that much). Anyway this book on Stealth Aircraft was interesting in that bugs and germs and virus’s are all somewhat stealth like when you think about them, as are many of the remedies for these things. What interested me in this book was the two differing methods and strategies used by two corporations to build two differing aircraft.  The same is now happening within Biological & Pharmaceutical Related industries in regard to finding a cure for this coronavirus epidemic.

Messengers – a pop culture psychology book regarding the messenger Vs the message issues.

Hyper Space – well I happen to like the easy reading Science Fiction from this author and it goes well with my ongoing love of Science Fiction and Technology in most realms.

Though that would be a stretch of the imagination – Elon Musk & Smarter Faster Better were also within that Learning Strategies image I spoke on earlier and all those books were kind of differing to my usual own preferences, know harm in wondering what I am missing out on.

Stealth Of Nations – Well we all know the classic take on black marketeers during the war and so on – though this book gives an up to date reality check, in the sense of demonstrating that it does not have to be all criminal activities and behaviour so much as part of the real day to day landscape of international or local markets and so on.

How to build a time machine – I thought that was obvious write a book as a self fulfilling prophecy and then wait until you are resurrected in the fashion and manner of all those positive uplifting thoughts feelings and behaviours, attributes and values, you know of and have written about yourself.  Yes this was another Science Fiction indulgence.

The Age Of Insight – Written by a Nobel Prize Winner, with good reviews.

Yes sometimes when you are bored and told to stay indoors it can seem that you have a little more reading time on your hands – especially if you want to maintain some shape and form of sanity through Media distancing as well as social distancing.

Dare To Lead was another of those Learning Strategy image books.

Treasure Hunt was cheap and from the author of The Simulation Hypothesis and it appears to me, that he follows and teaches many of the Meditation styled lessons and learning’s that I myself have been practising and encouraging albeit not as a Headline Act Guru of Meditators R US like all these famous folks and brands.

The Imagineers Of War – what first interested me was the cover – I grew up with early home computing and purchased assorted magazines and they were often given to have articles on how advanced research facilities had supercomputers that could run simulations and so on.  Or how Legends such-as Steve Jobs stole most of the ideas he claimed as his own from places such-as Xerox Park or Bell Labs.  This a topic that has always interested me, and of course I can never tire of saying I spent time in a University Robotics Lab where I saw not only various custom simulation software, though also the resultant physical product, and so on, as well as seeking to create my own. That Lab had been involved in Space Research prior & during my studies, although you do come to see that most Technologies, Theories and Research can be adapted for other realms once you have some grounding in engineering – where my layman’s growing up hands on knowledge of multiple life realm technologies was mostly as an end user obsessing about content rather than organisational frameworks and hierarchies and structures and engineering development and so on.

So what else – well I stated above regarding this idea of MEDIA DISTANCING – and I can only reiterate that whilst all of us might want to stay informed on some level – checking on family and friends and so on, as well as the news, most of us who grew up in the 1970’s might have seen a newspaper once a day, might have seen a news at ten styled programme for half an hour of our day, with no Social Media or News Media Platforms. The attention economies of Social Media & News Media potentially come with a cost that is not measured in pounds and pence, dollars and cents,  So much as health and well-being – I am given to believe that after a certain point of viewing, people are going to be induced into a level of neurotic psychosomatic hypochondria that is as potentially unhealthy and harmful for them as actually suffering any disease or ailment.

Yes I say I meditate though do I really – well in fact I have followed multiple Meditative Practices and teachings whilst utilising Holosync and whilst for some, the technology might make meditation itself irrelevant, I quite like learning some of the History and practices and rituals and breathing techniques and so on.

The most memorable washing hands in storytelling was probably Lady Macbeth and her Out Damned Spot routine (I think – it has been many years) anyway I thought we all carry sufferings and so on that we could perhaps list whilst washing our hands – I wash my hands of this Government, I wash my hands of this guilt and shame from X many years ago that has haunted me for so long etc.  Imagine the list of variations among so very many diverse nations and peoples and come to realise how suffering can itself probably be listed among those lowest common denominator topics and subjects that I have often rallied against.  Whilst there is little any individual with a low profile can do for the wider World, on an individual or subjective personal level – we can all choose better choices and options, behaviours and actions within our own lives, that reduces our suffering and potentially also reduces the suffering of those who we come into contact with in our lives, especially when we live in such interesting times.

Thank you for reading, God Bless and Be Well.